A $250 million plan for pumped hydro energy generation near Illawarra could provide baseload renewable power for up to 80,000 homes.

It is considering two potential options for expanding its Shoalhaven pumped hydro storage power station, which could power another 80,000 homes, and potentially come online around the same time energy rival AGL plans to shut down the Liddell coal-fired power station.

Origin chief executive Frank Calabria said while the government’s electricity reform policy, the National Energy Guarantee, would provide great certainty for renewable projects such as this, Shoalhaven's expansion would not hinge on it.

"We will test a variety of scenarios for Shoalhaven because we don’t know when the National Energy Guarantee is coming in, we don’t know the timing," Mr Calabria said.

"We will also test a variety of scenarios including Liddell [leaving the market] and that will be one consideration for what we will look at but the project won’t turn on these."

The company announced two different potential plans for the expansion of its Shoalhaven facility on Monday and that it could invest up to $250 million at the cost of around $1 million a megawatt.

The first, cheaper, expansion option would add around 160 megawatts of additional pump storage capacity by building a new turbine generator and adding another pipe and tunnel to transport more water.

This option would fulfil the original stage two expansion that was planned for the site when the Shoalhaven facility was built in 1977.

During the initial construction, infrastructure was built to accommodate this expansion, however, it was never built and it was not considered economically viable until now, Origin said.

That had changed thanks to the growth of wind and solar power and the need for greater reliable power to support this more intermittent generation. 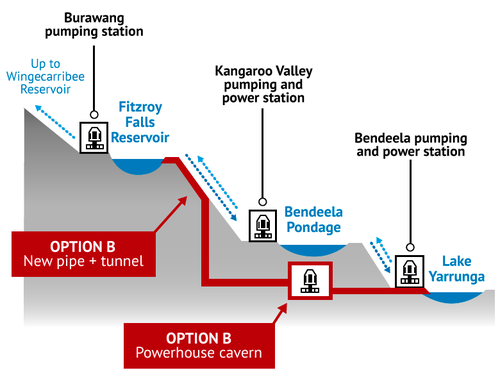 The second choice would create a new 235-megawatt pumped storage generator by drilling underneath the Bendeela dam, near the Fitzroy Falls, bypassing the existing Kangaroo Valley pumped hydro generator.

Mr Calabria told Fairfax Media the expansion project would have a relatively short construction and approvals time frame because there is already transmission infrastructure to take the power to the grid, avoiding the need for additional paperwork.

This would make it the second largest pumped hydro storage power station in Australia, roughly equal to CS Energy’s Wivenhoe hydro generation operation in Queensland but still behind Snowy Hydro.

Origin said it had to choose one option or the other as doing both an expansion of the dams and greater capacity which posed environmental and engineering issues.

“We’re trying to work within our existing footprint,” Origin said.

Origin is currently undertaking a $5 million feasibility study and working with the Australian Renewable Energy Agency on funding for the project.

It is understood that around 100 new construction jobs would be created if the company were to carry out Option B, with a handful of additional full-time equivalent roles created.

This article was originally written for The Sydney Morning Herald and can be read here.